The Winners Of The Contest The Koshkin Guitar Duo was formed in 2011 by the Russian guitarists Asya Selyutina and Olga Kamornik. The ensemble’s ambition is to enlarge their repertoire with transcriptions and original compositions for two guitars by Nikita Koshkin. At the moment the programme develops in three different directions – European music, Russian music and original works by Nikita Koshkin.

The Duo’s debut took place in Ankara (Turkey) with Bilkent Symphony Orchestra. Kamornik and Selyutina introduced the music by Nikita Koshkin and Joaquin Rodrigo. The Duo has also performed with very big success in Russia, Germany, Norway and Italy. The musicians gave master-classes at the Grieg Academy (Bergen) and appear regularly at the several guitar festivals in Russia. During 2015 Koshkin Guitar Duo became the prizewinner of the international ensemble competitions in Sankt-Petersburg, Moscow (Russia), Gorizia (Italy) and Borgo Val di Taro (Italy).

Asya Selyutina represents the new generation of the Russian classical guitarists. She appears regularly as a soloist in chamber music ensembles, with orchestras and as a jury member in competitions. She has performed in Russia, Ukraine, Italy, Turkey, India, Bhutan, Israel, and Iran, and was among the winners in several international guitar competitions, including Belgorod, Voronezh, St.Petersburg (Russia), Ukrainka, Kiev (Ukraine), Arhanes (Greece), and Belgrade (Serbia). Asya Selyutina graduated from Schnittke Music College, State Classical Academy in Moscow and has taken master classes with guitarists such as Elena Papandreou, Fabio Zanon, Philippe Villa, Zoran Dukic, Jaison Vieaux, and Odair Assad.

In 2009 her debut recording, Asya Selyutina – Guitar Solo, was released by Kreuzberg Records of Germany and was highly acclaimed. Nikita Koshkin has dedicated his solo guitar cycle Preludes and Fugue to Asya Selyutina. She is also a well-known teacher in Russia, and teaches at the Moscow State Classical Academy. Selyutina plays a guitar by Peter Barton.

Olga Kamornik, one of the brightest names in Russian classical guitar, showed her talent from an early age. As a child prodigy Olga won several junior competitions. She entered her first serious competition at the age of fifteen and was awarded third prize in the All-Russia competition. This success was followed by others in both international and Russian competitions.

Olga Kamornik, a well-known teacher in Russia, has performed in Russia, Belorussia, Ukraine, Germany, Scotland, and Turkey and often appears as a soloist with symphony orchestras. She plays ensemble music in a variety of chamber groups. Olga graduated with the Master’s degree with Professor Thomas Müller-Pering at the Franz Liszt High School of Music, Weimar, Germany. Since joining the Duo, Olga Kamornik also performs on a guitar by Peter Barton.

In 2011 Olga Kamornik was invited by Nikita Koshkin to form a duo with Asya Selyutina. At first this was difficult because the two performers were living very far from each other (Asya in Moscow and Olga in Rostov-On-Don), necessitating two hour air flights to attend rehearsals. But these difficulties were overcome and finally the Koshkin Duo was ready to perform concerts. However, at this time Olga entered the Franz Liszt High School of Music and the rehearsals became even more of a problem. But again nothing could stop the work. The Koshkin Guitar Duo travels regularly from Moscow to Weimar and back. While in Weimar, Asya and Olga took several lessons with Thomas Müller-Pering, Ricardo Gallen, Andiano del Sal and Lorenzo Micheli.

The Koshkin Guitar Duo are rapidly establishing a reputation as one of the world’s most eminent duos with their adventurous approach to new repertoire and their dedicated artistry and interpretative sensitivity.
The Winners II International «Guitar Magic Festival» 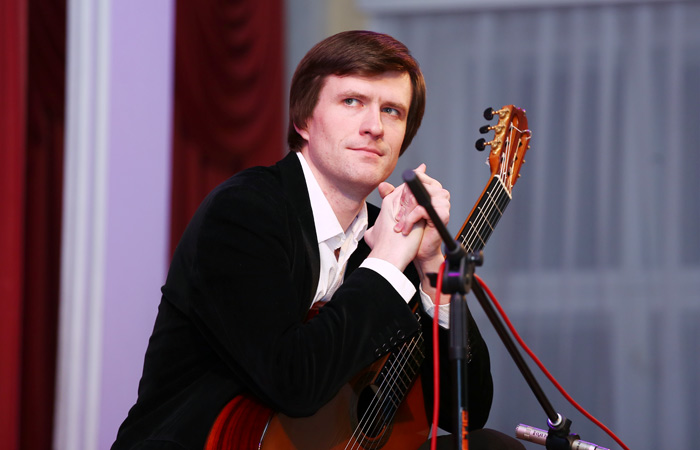 Pavel Kukhta is one of the brightest guitarists of Eastern Europe. He was born in 1984 in Grodno, where he has got his first musical education with prof. V. Zakharau. Having graduated from the Academy of Music in Minsk he entered the Master Course under prof. E. Gridushko. As a student he received grants from the Belarusian Ministry of Culture and from the Special President Found.

Pavel’s concert activity includes performances at some guitar festivals which were held in Austria, Belarus, Germany, Hungary, Lithuania, Poland and Slovakia. Also he played concerts at many prestigious concerts halls, such as: Kiev’s National Philharmonic, Belarusian State Philharmonic, MIPAC and others. Pavel is an active in radio and TV programs of Belarus, Hungary, Spain, Poland and Russia.

2013 is marked by a great event in Belarusian guitar life. It is remarkable for a joint concert of two guitar players Roland Dyens and Pavel Kukhta in a Big Concert Hall of Belarusian State Philharmonic.

In addition to his career as a concert-soloist, Pavel Kukhta is a talented teacher. There are many laureates of international guitar competitions among his students at Music College. Most of them continued their musical way at the Belarusian Academy of Music.

At present Pavel Kukhta is a soloist of Belarusian State Philharmonic and he teaches at the Belarusian Music College.
The Winners I International «Guitar Magic Festival»

As winner of the 2013 Guitar Foundation of America Competition and more than 20 other prestigious contests around the globe, Russian guitarist Anton Baranov has established himself as one of the leading guitarists of today.

His performances in a number of distinguished halls such as Carnegie Hall in New York, Palau de Musica in Valencia, Mariinsky Concert Hall in St. Petersburg, and Hakuju Hall in Tokyo have been described by musical critics as “pure magic” (Cleveland Classical), and “manages to paint beautiful sound pictures of rich depth and color with his guitar.” (The Guitar).

Known for Baranov’s daring interpretations and innovative programms, world renown guitarist and composer Roland Dyens called him, “…a real misician, one of those rare guitarists who are able to have their attendees almost forget the instrument they play, managing to have them focus on the expressivity of the music and only this.”

Baranov’s recordings includes one album for Naxos Classical and a CD for Contrastes Records. Naxos released Latin American Guitar Sonatas in May 2014. His Contrastes Records album consists of Spanish guitar music and it’s on the market since August 2014.

Anton Baranov was born in 1984 and started playing guitar at the age of ten. He completed his musical education at the oldest and most famous Russian school of music, the Saint-Petersburg State Rimsky-Korsakov Conservatory, where he has had a teaching position since his graduation in 2010. Mr. Baranov has been a D’ Addario artist since 2013 and plays a Sakurai – Kohno guitar.